Today I had an interesting exchange on Twitter.  As I perused my Twitter feed I came across this article from The Hill 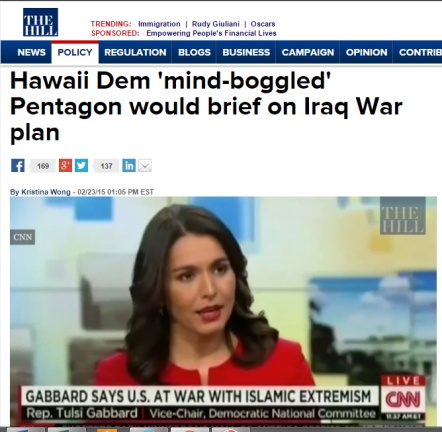 The article, which you can click on the picture to read, details Rep. Gabbard’s comments regarding a Pentagon briefing that she felt revealed too much information.  Unlike most Democrats, Rep. Gabbard is in favor of arming Kurds fighting the Islamic State and she’s okay with calling this a war against Islamic extremism.  These are not positions with which I agree, just to be clear, but that’s beside the point in this particular instance.  What followed this tweet was this reply…

So, here’s the thing, Rep. Tulsi Gabbard has been to war.  She requested to ship out to Iraq and she served in a medical until.  She is one of the very few female combat veterans currently in office.  I don’t know if she’s seen anyone die, given that she was in a medical response unit I would guess that she has.  So here is what followed… 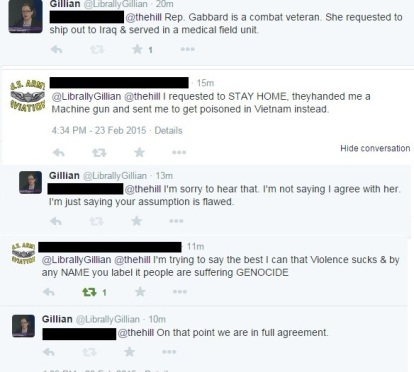 The best way to say that “VIOLENCE sucks & by any NAME you label it people are suffering GENOCIDE” is not to immediately assume that because Rep. Gabbard is a woman she has no meaningful combat experience.  While I disagree with Rep. Gabbard, I cannot fault her experience.  There are a fair number of congresspersons with absolutely zero experience in the military who have no problem calling for the arming of Kurds and putting American boots on the ground.  They do not often get called out for their lack of combat experience and certainly not in such a blatantly patronizing way.

If what you want to say is the violence sucks and people in this region are living in full-fledged wartime conditions without any hope of peace then say that.  Say those words.  Do not say “GO TO WAR HONEY. Then talk shit” because you sound like a sexist jerk rather than a human being who probably went through a horrific experience that you never want to visited upon another soul.

Tell us that the horrors of war have never solved anyone’s problems.  Tell us that violence begets violence.  Tell us that you will never be the same person you were before you went to war.  Say all those things.  Those are words that we can respect.  Those are things that I agree with.  Don’t call a sitting United State Congresswoman “honey”.  Don’t reference her age of 31 which, by the way is more than a decade older than you have to be to join the military in the first place, as though at 31 she couldn’t possibly have seen the reality of war when your problem isn’t her age but her gender. These are distractions.  These things are not the point and they shut down the conversation instead of starting it.