I spend a lot of my day being somewhere between annoyed and outraged at the space women are forced to occupy in society.  So when I was doing some Google research, trying to decide what to name my new blog I was unable to turn away from a WikiHow article titled: How to Avoid Looking Inappropriate for the Office (for Women).  I was playing with the idea of being appropriate or inappropriate and the ways that people use the words appropriate/inappropriate to police things that they find unpleasant or distasteful.

In any case, here sits this article that I simply must read because it might as well have been gift-wrapped for me to open and utterly despise and marvel at in every way.

Oh the frumpy police.  Look professional, ladies.  For heaven’s sake though, don’t look frumpy.  You don’t want the boys to be distracted by how “boxy” you look.  The adjective boxy gets used three times in this piece.  They are very clear to point out that under no circumstances do you want to look boxy.

I’m getting ahead of myself though, because the important point of this first method of looking professional (which involves no less than sixteen different rules) is that you want to show some skin – but not too much.  See that young woman over there?  See that scandalous neckline she’s tugging at?  Even if her chest was three sizes larger she could yank that shirt as hard as she wanted and not show even a hint of decolletage (that’s fancy for cleavage).  I mean look, they’re not saying you should feel “obligated to disguise your natural figure”, they’re just saying keep it clean.  Men are looking at you and they have important things to do that don’t involve lurid sexual fantasies about your tits.

The thing that WikiHow really wants to impress upon you is that you don’t need to hide your feminine figure.  Seriously.  It’s okay.  We all know you’re a woman.  Wear a skirt.  It’s fun and feminine and it can even be professional if you cover just

enough of your legs but not too much.  Do not wear a maxi-skirt because – and it can’t be said often enough – it could make you look boxy.  Clearly you don’t want to wear a mini-skirt.  No one needs to see your vageen at work, but give the boys a little leg.

I wonder something.  What if you just are boxy?  The people at WikiHow must feel really bad for you.  Presumably we all look just like this chopped up young woman in the pictures so we won’t have any problems at all as long as we follow the very simple sixteen rules that WikiHow has laid out for us.  After all, if you’ve gotten far enough in life that you’ve made it to a professional office workplace situation, how could you possibly have managed at any point to learn how to pick out a wardrobe that’s appropriate for the workplace? 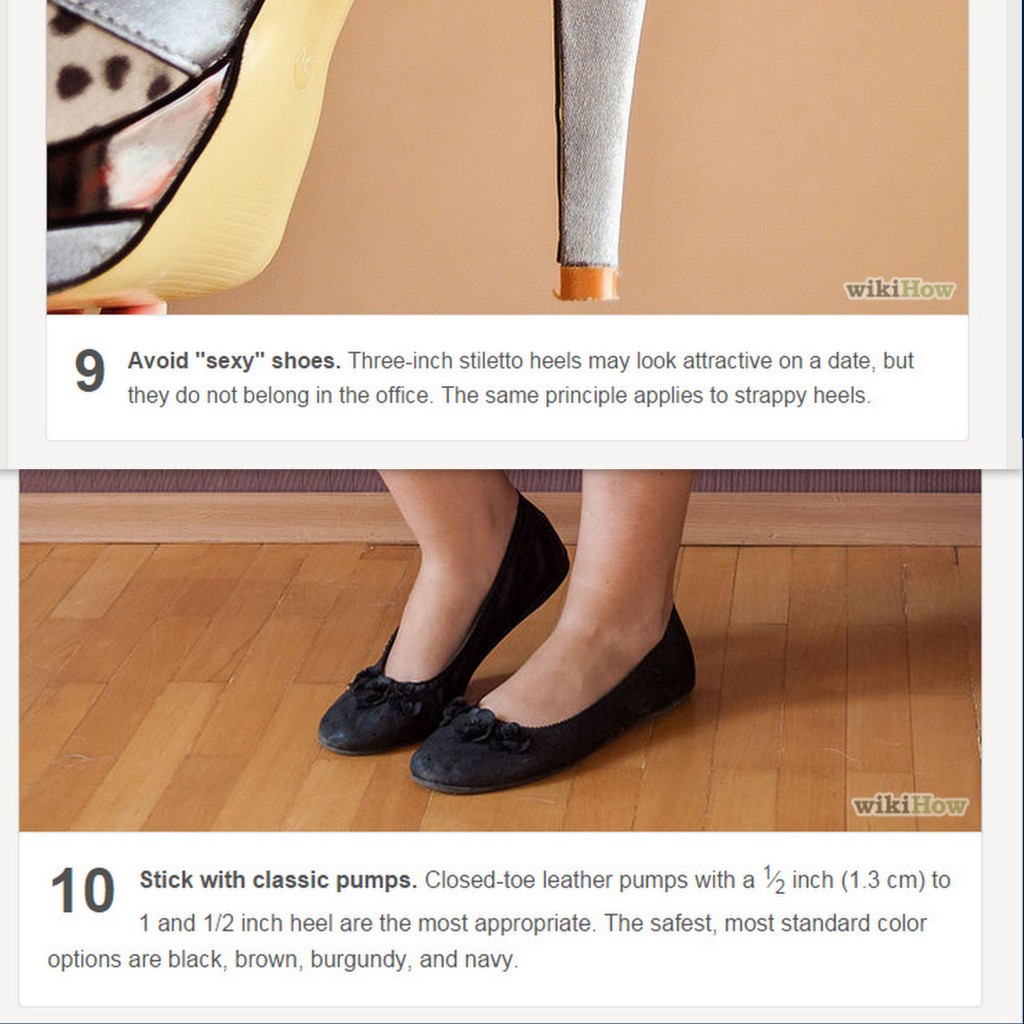 As a loud and proud feminist who is also 5’2″ (okay, the 2″ may be a slight exaggeration), I wear my five inch stiletto heels with pride and also because it helps me look tall people in the eye rather than up their nose or into their chest. One and a half inch heels does not cut it for me, and it doesn’t have to for you either.  Are you going to wear seven inch clear platform stilettos with a live fish in the platform?  Probably you aren’t.  If you work in an office, you know that’s not going to fly.  Although who am I to say, maybe you work at a really cool office.  You’re an intelligent human being, figure it out.  Here’s the other thing though, when WikiHow is telling me to “Stick with classic pumps”, they’re showing me a picture of ballet flats, which may also not be considered appropriate in your office.  Oh, and I’ve never seen a pair of “classic pumps” with less than a two inch heel.

We should hit up method 2 before I lose my mind.  So, I have a couple questions about the two methods that I don’t feel are adequately addressed.  In the first place, the two methods approach to categorization makes it seem as though it’s an either/or situation.  Try this method or try that method.  Method 1 looks primarily at your clothing and your body.  Method 2, on the other hand, focuses on makeup and accessories.  What I suppose I’m asking is, are they suggesting that if you can’t

help but wearing plunging necklines and short skirts then at least you can tone down the rest of your ensemble?  Is that the suggestion?

It’s probably not. They would probably prefer that you follow all the rules, which in the end is 26 separate suggestions for how you should dress.  It was really difficult for me to winnow down from the ten remaining rules for dressing like a classy lady at the office, the two that really make me want to break a glass ceiling.  Nevertheless, I will pick only two and you can check out the rest and take some time to tell your friends what utter bullshit standards people want us to live by.  What I’ve decided is that I’m going to pick one that makes me mad and one that I’m going to ridicule mercilessly.

Hang on though, before I pick just one, the pictures in the second half were very confusing.  I wasn’t always sure whether I

was being shown what I should do or shouldn’t.  I mean, in this picture the woman is scowling at a pair of perfectly good hoop earrings so I assume these are a no-go.  Is it a scowl?  Is she inwardly chastising herself for even owning these earrings?  Is she chastising the earrings for being so large and hoop-like?  Is she thinking, “gee, I wish I could wear these to the office today but the stuffy tight-asses I work with would get so bent out of shape if they could see my earrings.  Jeeze, Jan…” (I’m imaging her name is Jan) “…why did you even buy these?”

Personally, I love a big hoop. Well, if I’m honest, I love what I think looks good on me and I also love what you think looks good on you.  I think if you feel good about how you look then you’re probably doing okay.  We all have bad body image days and if a pair of big hoops is going to lift your spirits: wear them.  Anyone that’s going to get the vapors about your hoop earrings is dealing with other problems.  While it’s telling you how inappropriate your hoop earrings are, this piece also wants you to know that you should remove all your “non-traditional” jewelry, which they define as “eyebrow rings, nose rings, and other similarly non-traditional piercings”.  They illustrate this by showing a woman’s hand holding a necklace with a black plastic-rimmed glasses frame pendant.  But WikiHow, however will I adorn my neck if not with my black plastic-rimmed glasses pendant necklace?!

Never fear, WikiHow has the answer!

Consider a “fashion scarf”!  Okay, can I please start by saying that nothing about that piece of old gauze she’s putting around her neck can be described as either “fashion” or a “scarf”.  But sure, fine.  I’ll consider a scarf.  I have no problem with a glossy silk scarf…as long as it’s smooth.  Wait, why does it have to be smooth?  What’s wrong with a textured scarf?  I have so many questions.

Before I utterly lose myself down the rabbit-hole of questions I have about this how-to nightmare, I had a question as I began writing.  Is there a “How to Avoid Looking Inappropriate at the Office (for Men)”?  Short answer: there isn’t.  I did see a piece called “How to Dress Professionally” which did address both men and women.  Apparently men just don’t need to be told how to dress.

4 thoughts on “How to Avoid Avoiding Looking Inappropriate at Work”