It’s a new year and time for resolutions that I’m sure to break within the month.  Will it be yoga?  Will it be eating better?  No.  Although those are good and maybe I’ll give them a go.  One thing I would like to do however is re-dedicate myself to some writing.  In that vein, I thought I’d give a few words on a new board game I just purchased.

Thanks to some Amazon gift cards, I got to do a bit of shopping for me and settled on a couple board games.   The one I thought I’d mention today is called Monarch.  The game was created by Mary Flanagan with art by Kate Adams.  A game created and illustrated by women is pretty cool straight off.  I don’t know what the percentage of games created by women is, but I play a lot of board games and I don’t see many women’s names on them.

Even the box is fantastic!

Monarch is better than a game made by women in a beautiful box, though.  The players also play women – princesses, in fact.  The players become the dueling heiresses of the kingdom of Minervia.

The game layout is simple.

There are twelve land cards used to make a nine tile kingdom with farms to bring in harvest and villages to bring in taxes.  There’s a deck of cards that’s used to make the market from which the players improve the lands, build their court, reap the benefits and demerits of the moons, and even a few unwelcome guests to pawn off on their sisters.

The rules are fairly simple, but the gameplay requires more strategy than it first appears.  I played with my family – myself, my husband, and my son – and we breezed through our first game.  It was so fun we played it again immediately.

The estimated game time is 45 minutes, which we found to be about accurate and happily so.  As much as I love board games, I don’t have an excess of free time on my hands, so if a game says 45 minutes it can often be a problem if it stretches out to an hour and a half.  We didn’t even have to give Monarch the first play through time discount. 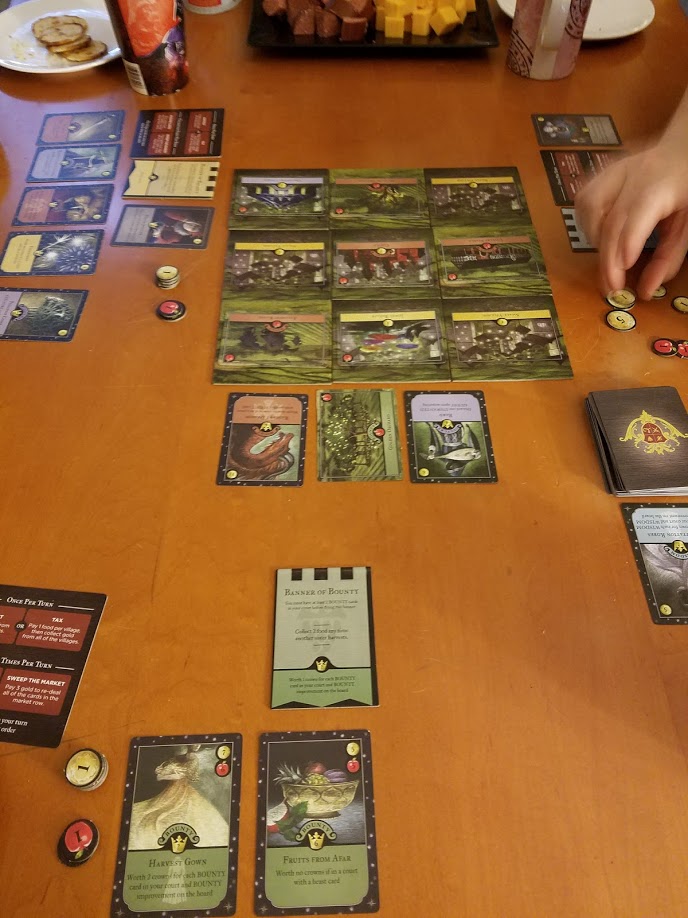 I highly recommend Monarch for everyone from a board game novice to a regular player.  It’s a fun and fast fantasy game for the whole family (as long as your family is not more than 4 people)!