Yet another of Bernie Sanders rallies was interrupted by Black Lives Matter protesters.  Like most white liberals I have mixed feelings.  This is a a thing that I will honestly admit.  Personally, I’m not a Bernie supporter.  I mean, if he wins the Democratic nomination I’ll vote for him in the general; I’ll even campaign for him in the general election, but not yet.  In any case, this most recent interruption in Seattle is the third of which I am aware.  There was Netroots Nation, some thing in a park, and now a 15,000 person rally in Seattle.

…which brings me to this thing that was in my Facebook feed:

It is fair to point out that I am a Hillary Clinton supporter, although I did recently take a quiz designed to see which candidate you are most highly aligned with and I scored higher on Bernie Sanders than Hillary Clinton.  So it’s not that I don’t agree with Bernie on nearly every issue, I do.  That said, I think that the disruptions of Bernie Sanders rallies by the #BlackLivesMatter movement deserve some serious analytical thought rather than a knee jerk “but he was part of the Civil Rights movement” memery.

Let’s address this first.  When I Googled “Bernie, Black Lives Matter” I got a list of articles that looked like this… 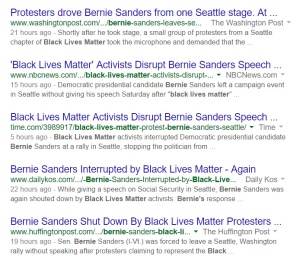 Now, to say that #BlackLivesMatter disrupted or interrupted Bernie Sanders is absolutely a legitimate headline.  That happened.  Protesters did not drive Bernie from the stage.  It was a sizable stage, there was plenty of room.  They also didn’t “shut down” the rally by any stretch of the imagination since the rally continued once they accomplished their goal.

So thank you to NBC News, Time, and Daily Kos for using more accurately descriptive language in your headlines.  Using hyperbolic language does not help a conversation, although it certainly does drive clicks.  Let’s all remember that.

In any case, back to the meme.  Speaking of hyperbolic language, if you honestly and truly think that Bernie Sanders is the “only candidate willing to help” people of color I think you’re engaging in selective memory at best.  Remember the Clinton administration, when Bill was President?  I do.  I pretty specifically remember him being referred to as our first black President.  Isn’t that crazy?  That’s how impossible having an actual black President felt.  In any case, the Clintons have had strong ties with the black community for decades at this point and it’s not without reason, even if the relationship hasn’t always been perfect (I’m looking at you, 1994 crime bill).  This is not even to mention Martin O’Malley who, after having been prompted at the Netroots Nation rally at the same time as Bernie Sanders, has begun to put together a structural racism policy platform.  Hillary Clinton’s campaign has recently reached out to #BlackLivesMatter specifically.  To say that only Bernie can help the black community is hyperbolic – again – at best.

While thinking about this I was doing some more Googling and came across a really well-written piece on Vox that makes some excellent points about Bernie Sanders’ policy positions.  Dara Lind’s piece brought up a Sanders profile by Andrew Prokop which included this:

“Bernie is in many ways a 1930s radical as opposed to a 1960s radical,” says professor Garrison Nelson of the University of Vermont. “The 1930s radicals were all about unions, corporations — basically economic issues rather than cultural ones.”

And I think that’s probably the best description of Bernie Sanders I’ve ever heard.  As a woman, I see the problem with thinking that fixing our economic issues will solve all our problems because Marxists had the same problem.  They thought that solving the economic issues would eliminate gender inequality.  What they didn’t address is that gender inequality doesn’t just exist in the workplace, it exists in the home as well.  These things certainly intertwine, but you can’t solve both by addressing just one.  That – incidentally – is one of the significant differences between Marxism and socialism, in case anyone ever asks.

In terms of asking why aren’t #BlackLivesMatter protesting Republicans…  I would imagine because it would be more productive to yell at a wall.  Let’s move on.

If we look back I think you can see why Hillary Clinton hasn’t gotten the same treatment as Bernie Sanders.  Martin O’Malley probably only got interrupted at Netroots Nation because Bernie Sanders was there.  If there’s a Democratic campaign that you can justifiably ignore, it’s O’Malley’s. (I know it sounds mean, but seriously, Martin O’Malley is not going to be he Democratic nominee.)

Above everything else in this meme-message thing, however, what most makes me cringe/eyeroll most is the “Something doesn’t seem right here.”  No.  Something isn’t right, otherwise #BlackLivesMatter wouldn’t need to exist.  There isn’t a sinister plot to stop Bernie Sanders from becoming President.  People being critical of your chosen candidate aren’t conspiring to bring about their downfall, they are offering critique that is – certainly in this case – necessary.  Not only is it necessary, but apparently it’s sinking in because Bernie Sanders is actually making an effort to talk about structural racism.  What #BlackLivesMatter seem to be doing is pushing him outside his talking about an economics-only view of income inequality bubble, and that’s probably ultimately a good thing.  Bernie Sanders cannot win with white progressives alone.  He has to expand and that means acknowledging that the problems of economically disadvantaged people of color are rooted just as much in the “people of color” half of that equation as the “economically disadvantaged” half, if not more so.

If Bernie Sanders can take the heat, so should his supporters.  It’s safe to say that not everyone addresses their primary policy issues in the same way, but I don’t know that any one way is necessarily the best.  Disapprove of the methodology if you want, but disrupting Bernie’s speeches seems to have yielded results, even if the means “disappointed” him.

Ultimately, we should remember that Bernie Sanders is neither magic nor without room for improvement.  Whether or not you agree with the drastic measures, it’s important for a candidate whose claim to fame is working for the common person that he recognizes that not all the common people have the same problems in the same ways.